20 September 2022—Singapore: Jadestone Energy plc (AIM:JSE) (“Jadestone” or the “Company”), an independent oil and gas production company and its subsidiaries (the “Group”), focused on the Asia Pacific region, reports today its unaudited condensed consolidated interim financial statements, as at and for the six-month period ended 30 June 2022 (the “financial statements”).

Management will host a conference call today at 9:00 a.m. UK time, details of which can be found in the release below.

“Jadestone delivered record financial results in the first half of 2022, with production increasing by c.50% compared to the first half of 2021, driven by a full period contribution from the Malaysian assets acquired in August 2021 and the impact of the Montara drilling programme in the second half of 2021, albeit offset by an unplanned shutdown at Montara early in 2022 due to a compressor engine failure.  Revenues and adjusted EBITDAX increased by 63% and 113% respectively, due to the increase in production volumes and higher realised oil prices.  As a result, we ended the period with a net cash balance of US$161.6 million, an increase of almost 40% compared to year-end 2021.  Jadestone remains debt free.

Despite all this, recent operational performance at Montara has been disappointing, especially given the substantial upgrade and repair work done to date.  As previously announced, the field is currently shut-in as we progress a remediation plan for the Montara Venture FPSO following defects identified earlier this year.  The plan involves emptying, cleaning, inspecting and, where necessary, resolving any defects in the tanks and hull of the FPSO.  In particular, we are moving ahead with the permanent repair of 2C crude oil cargo tank and 4S ballast tank whilst prioritising entry and activity in other tanks in preparation for operational readiness.  As we focus on safety and integrity, this activity will continue until we can ensure a safe and reliable restart of the FPSO.  In parallel, we are making good progress in the appointment of, and work scope for, the independent reviewer, who will work with us to provide final assurance to Jadestone and the regulator on our remediation plans and operational readiness prior to the restart of production operations.  While we understand that the lack of a firm restart date is frustrating for many of our stakeholders, our focus is on the remediation plan and its successful execution which, in turn, will restore confidence in the significant remaining value we see at Montara.

We have also initiated a fundamental review of our hull and tank inspection and repair regime, which will include our maintenance approach, operating systems and organisational structure.  As a near-term action to assist management, Jadestone’s Board of Directors has established a special subcommittee, which will work closely with Company’s executive and senior operations leadership, providing both additional support and challenge, while the Montara FPSO hull and tank remediation work is in progress.  This will include weekly progress updates and reports.

The balance sheet strength we have built in recent years, and the confidence in our existing asset portfolio and its planned growth, means we are well-positioned to weather the Montara shut-in without any anticipated impact on our investment programmes, inorganic growth, or near-term shareholder returns.  We expect capital expenditures for the year to be in line with guidance of US$90.0 – 105.0 million.  We have also taken the decision to increase the interim dividend by 10% to US$3.0 million  and, subject to market conditions, we intend to complete the US$25.0 million share buyback programme launched in August and which has so far returned an incremental US$4.9 million to shareholders.  The next phase of the shareholder returns strategy announced in June will be determined by the timing of production restart at Montara, our portfolio’s operational performance, realised oil prices, and the timing and scale of incremental inorganic growth opportunities.

The Company continues to deliver on its growth strategy.  In June, we took a final investment decision on the Akatara gas development on the Lemang PSC in Indonesia, with activity at the site now well underway.  Separately, the acquisition of the outstanding 10% stake in the Lemang PSC is expected to complete soon.  In July, we announced the acquisition of a non-operated interest in the producing Northwest Shelf (“NWS”) oil project offshore Australia, and are making good progress towards closing this transaction in Q4 2022.

Our strong balance sheet underlines the success of our business model, supporting our planned investments for growth, and while the recent Montara asset incident is unfortunate, we are determined to fix it and deliver the original value proposition vindicating our strategy in the Asia Pacific region.”

2  Operating costs per boe, adjusted EBITDAX and net cash are non-IFRS measures and are explained in further detail below.

4 Unit operating costs per boe before workovers and movement in inventories but including net lease payments and certain other adjustments (see non-IFRS measures below).

The management team will host an investor and analyst conference call at 9:00 a.m. (London)/4:00 p.m. (Singapore) today, Tuesday, 20 September 2022, including a question-and-answer session.

The live webcast of the presentation will be available at the below webcast link.  Dial-in details are provided below.  Please register approximately 15 minutes prior to the start of the call.

The results for the financial period ended 30 June 2022 will be available on the Company’s website at: www.jadestone-energy.com/investor-relations/

On 20 September 2022, the Directors declared a 2022 interim dividend of 0.65 US cents/share, equivalent to a total distribution of US$3.0 million.  The timetable for the dividend payment is as follows:

The Group’s growth-orientated strategy remains unchanged, with the objective of establishing a leading Asia-Pacific upstream company through acquiring and maximising the value of producing fields and development assets.  The Group prioritises organic reinvestment, and maintains a conservative capital structure in order to capitalise on inorganic growth opportunities as they arise.  Notwithstanding this, the Group believes that its production and development led business model is fundamentally pre-disposed to provide meaningful shareholder returns, particularly during times of higher oil prices.  The Company targets a sustainable base dividend, with a targeted split one-third to an interim dividend and two-thirds to a final dividend, growing over time in line with underlying cash flow generation.  The base dividend may be augmented over time by additional shareholder returns (in the form of share buybacks, special dividends and/or tender offers) if deemed appropriate by the Company.

On 2 August 2022, the Company announced the launch of a share buyback programme (the “Programme”) in accordance with the authority granted by the shareholders at the Company’s annual general meeting on 30 June 2022.  The maximum amount of the Programme is US$25.0 million, and the Programme will not exceed 46,574,528 ordinary shares.  There is no certainty on the volume of shares that may be acquired, nor any certainty on the pace and quantum of acquisitions.

As at 16 September 2022, the Company had acquired 4.7 million shares at a weighted average cost of £0.89 per share, resulting in an accumulated total of US$4.9 million. 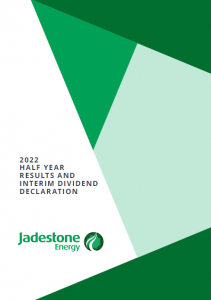