19 January 2023—Singapore: Jadestone Energy plc (“Jadestone”, or the “Company”) an independent oil and gas production company focused on the Asia-Pacific region, is pleased to announce that it has executed a sale and purchase agreement (the “Agreement”) with Salamander Energy (S.E. Asia) Limited (the “Seller”), an affiliate of PT Medco Energi Internasional Tbk, to acquire the Seller’s interest in three legal entities, which collectively own a 9.52% non-operated interest in the producing Sinphuhorm gas field and a 27.2% interest in the Dong Mun gas discovery onshore northeast Thailand. The headline cash consideration is US$32.5 million, to be funded from the Company’s cash resources.

“While modest in scale, this opportunistic tuck-in acquisition is low cost, low emissions intensity and very low decline production from the onshore Sinphuhorm gas field.  The asset is an excellent addition to our portfolio, diversifying our existing production base, and is a first important step towards building a significant natural gas position within our portfolio as part of our energy transition strategy.  Furthermore, these assets carry minimal abandonment liabilities and are administered under very attractive Thai I PSC terms with recent extensions to both the licence and the GSA.

The asset is highly predictable and reliable, running at close to 100% uptime in 2022 and with a high take-or-pay to a regional power station for electricity generation.  We see upside from further infill drilling within Sinphuhorm, with wells planned in 2023 and 2024, and the potential development of the Dong Mun gas discovery, which is 100% owned by APICO, and which represents upside beyond the consideration paid.  Establishing a presence in Thailand, as well as re-engaging directly with PTTEP, will also leave us well-positioned to capitalise on further potential asset divestments that we see coming to market in the near-term.”

A short presentation on the acquisition is available on the Company’s website at https://www.jadestone-energy.com/investor-relations/presentations-communication/.

Overview of the acquisition

The acquisition is scheduled to close in February 2023 following specific corporate actions of the Seller.

Overview of the acquired assets

The Sinphuhorm gas field was discovered in 1983 and commenced production in 2006.  The reservoir is the Permian age fractured carbonate Pha Nok Khao formation, which contains dry gas with a low gas condensate ratio of c.4 bbls/mmcf.

The field has been developed with eleven wells, of which ten are currently producing, drilled from three surface pads in the central and southern part of the field.  Further development well locations have also been identified.  Pressure depletion trends confirm lower connectivity between the northern and southern parts of the field, with further development potential existing to the north as a result.  The field produced an average of 97 mmcfd in 2022.  A total of 506 bcf of gas and 2.1 mmbbls of condensate had been produced by 31 December 2021, equating to a 46% recovery factor.

The Sinphuhorm well pads are tied back to a central gas plant with 140 mmcfd capacity and the ability to stabilise small amounts of condensate.  The plant, with its simple design, enjoys high reliability, uptime and performance, with a 16-year track record of safe operations.  Operating costs are very low at c.US$3/boe and decommissioning costs net to the acquired 9.52% interest are estimated at approximately US$2 million.

Gas from Sinphuhorm is exported via a 64 kilometre pipeline to the Nam Phong power plant, the largest in northeast Thailand.  Sinphuhorm gas is contracted under a long-term take-or-pay GSA with PTT, as the gas buyer.  The current GSA extends over the remaining term of the concession, which expires in March 2031.  Gas demand has consistently exceeded 90 mmcfd over the last four years and is expected to remain strong in the foreseeable future amid declining regional supplies and high import prices.  The Sinphuhorm gas price is linked to high sulphur fuel oil.  Sinphuhorm condensate is sold to PTT under a long-term condensate sales agreement.

A project to boost compression at the field is already underway with a gross cost estimate of US$62 million and is expected to be onstream in Q3 2024.  In addition, further infill wells are planned in 2023 and 2024.  Management estimates that at 31 December 2021, the field contained gross 2P reserves of 288 bcf of gas and 0.82 mmbbls of condensate (27 bcf and 0.08 mmbbls net to Jadestone). ERCE, Jadestone’s reserve auditors, have reviewed management’s methodology and assessment of Sinphuhorm 2P reserves.

Natural gas from Sinphuhorm plays a critical role in meeting the increasing demand for cleaner-burning fuel as the Thailand energy market and economy transitions to a lower carbon future.  The operations at Sinphuhorm have a Scope 1&2 GHG emissions intensity of ~ 7.5 kg CO2e/boe, well below the global upstream average.  The operator of the Sinphuhorm has stated publicly[3] that it plans to explore the potential for a carbon, capture and storage project at the field, which could reduce absolute emissions and intensity even further.

The Dong Mun field is an undeveloped discovery in the L27/43 concession (100% APICO) approximately 80km southeast of Sinphuhorm.  Gas was tested in the PNK carbonate formation (same reservoir setting as Sinphuhorm) with APICO estimating 56 bcf gross 2C contingent resources for the discovery.  APICO is considering developing Dong Mun through a phased approach – initially through a compressed natural gas scheme and then a small-scale LNG development.

Jadestone Energy plc is an independent oil and gas company focused on the Asia-Pacific region.  It has a balanced, low risk, full cycle portfolio of development, production and exploration assets in Australia, Malaysia, Indonesia and Vietnam.

The Company has a 100% operated working interest in the Stag oilfield and in the Montara project, both offshore Australia. Both the Stag and Montara assets include oil producing fields, with further development and exploration potential. The Company also has a 16.67% non-operated interest in the North West Shelf Oil Project offshore Western Australia, comprising four oil fields containing significant upside potential through potential infill drilling and life extension activities.

The Company has interests in four oil producing licences offshore Peninsular Malaysia; two operated and two non-operated positions, and has signed an agreement to acquire a non-operated interest in the Sinphuhorm producing gas field onshore Thailand.

Further, the Company has a 100% operated working interest in two gas development blocks in Southwest Vietnam, and an operated 100% interest in the Lemang PSC, onshore Sumatra, Indonesia, which includes the Akatara gas field development, where first production is expected in the first half of 2024.

Led by an experienced management team with a track record of delivery, who were core to the successful growth of Talisman’s business in Asia, the Company is pursuing an acquisition strategy focused on growth and creating value through identifying, acquiring, developing and operating assets in the Asia-Pacific region.

Jadestone Energy plc (LEI: 21380076GWJ8XDYKVQ37) is listed on the AIM market of the London Stock Exchange (AIM: JSE).  The Company is headquartered in Singapore.  For further information on the Company please visit www.jadestone-energy.com.

This announcement may contain certain forward-looking statements with respect to the Company’s expectations and plans, strategy, management’s objectives, future performance, production, reserves, costs, revenues and other trend information.  These statements are made by the Company in good faith based on the information available at the time of this announcement, but such statements should be treated with caution due to inherent risks and uncertainties.  These statements and forecasts involve risk and uncertainty because they relate to events and depend upon circumstances that may occur in the future.  There are a number of factors which could cause actual results or developments to differ materially from those expressed or implied by these forward-looking statements and forecasts.  The statements have been made with reference to forecast price changes, economic conditions and the current regulatory environment.  Nothing in this announcement should be construed as a profit forecast.  Past share performance cannot be relied upon as a guide to future performance.  The Company does not assume any obligation to publicly update the information, except as may be required pursuant to applicable laws.

A. Shahbaz Sikandar of Jadestone Energy plc, Group Subsurface Manager with a Masters degree in Petroleum Engineering, and who is a member of the Society of Petroleum Engineers and has worked in the energy industry for more than 25 years, has read and approved the technical disclosure in this regulatory announcement.

The information contained within this announcement is considered to be inside information prior to its release, as defined in Article 7 of the Market Abuse Regulation No. 596/2014 which is part of UK law by virtue of the European Union (Withdrawal) Act 2018. 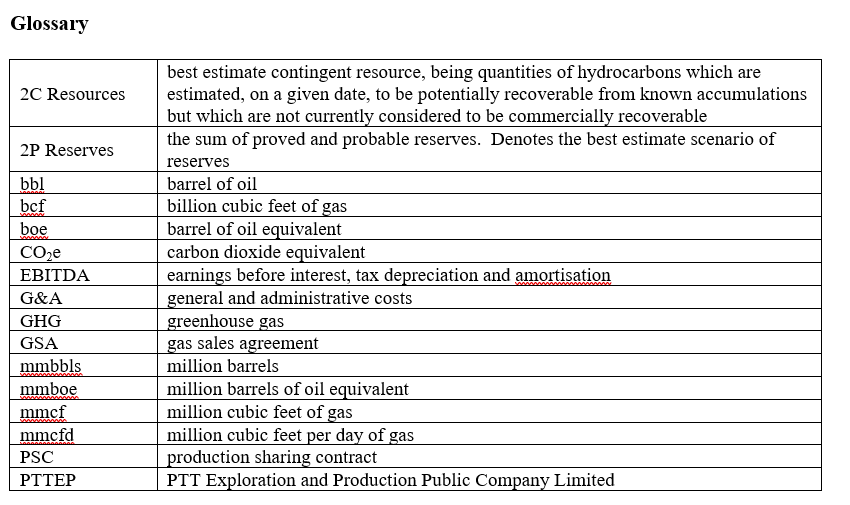