The share options are exercisable for a period of ten years at an exercise price of GBP 0.92 per share and will vest upon the third anniversary of the grant date.

Furthermore, the application for a block listing of securities in respect of 1,046,690 ordinary shares (the “New Ordinary Shares”) to be admitted to trading on AIM, has been submitted by the Company to the London Stock Exchange, with the admission expected to become effective on or around 15 March 2022.  When issued, the New Ordinary Shares will be credited as the Company’s ordinary shares of £0.001 each, and each with voting rights in the capital of the Company.

At present, the issued share capital of the Company comprises 465,455,284 ordinary shares of £0.001 each, and each with voting rights.  The Company does not hold any ordinary shares in treasury.  This figure should be used by shareholders as the denominator for the calculations by which they will determine if they are required to notify their interest in, or a change to their interest in, the Company under the FCA’s Disclosure Guidance and Transparency Rules.

Paul Blakeley, the Executive Director, President & Chief Executive Officer of the Company is a person discharging managerial responsibilities who is the recipient of the share options, the performance shares and the restricted shares under the 2022 LTI Awards. The FCA notification, made in accordance with the requirements of the UK Market Abuse Regulation is appended below and gives further details on the transaction. 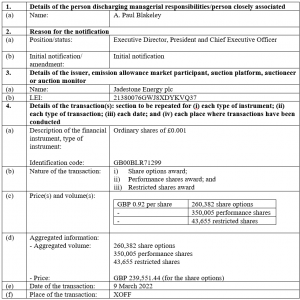 Jadestone Energy plc is an independent oil and gas company focused on the Asia-Pacific region.  It has a balanced, low risk, full cycle portfolio of development, production and exploration assets in Australia, Malaysia, Indonesia, Vietnam and the Philippines.

The Company has a 100% operated working interest in the Stag oilfield and in the Montara project, both offshore Australia. Both the Stag and Montara assets include oil producing fields, with further development and exploration potential.  The Company also has interests in four oil producing licences offshore Peninsula Malaysia; two operated and two non-operated positions.  Further, the Company has a 100% operated working interest in two gas development blocks in Southwest Vietnam, and an operated 100% interest (assuming completion of the Hexindo stake acquisition, as announced in November 2021) in the Lemang PSC, onshore Sumatra, Indonesia, which includes the Akatara gas field.

In addition, the Company has executed a sale and purchase agreement to acquire a 69% operated working interest in the Maari Project, shallow water offshore New Zealand, and is working with the seller to obtain final New Zealand government approvals.

Led by an experienced management team with a track record of delivery, who were core to the successful growth of Talisman’s business in Asia, the Company is pursuing an acquisition strategy focused on growth and creating value through identifying, acquiring, developing and operating assets in the Asia-Pacific region.

Jadestone Energy plc is listed on the AIM market of the London Stock Exchange.  The Company is headquartered in Singapore.  For further information on the Company please visit www.jadestone-energy.com.

The information contained within this announcement is considered to be inside information prior to its release, as defined in Article 7 of the Market Abuse Regulation No. 596/2014 which is part of UK law by virtue of the European Union (Withdrawal) Act 2018.